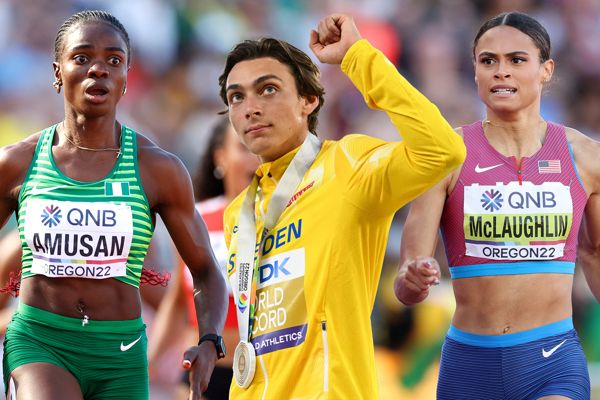 The world records set by Tobi Amusan, Mondo Duplantis and Sydney McLaughlin at the World Athletics Championships Oregon22 have been ratified.

McLaughlin’s was the first of the senior records to fall at this year’s World Athletics Championships, the US 23-year-old obliterating her own previous world record with a time of 50.68. It is the fourth world 400m hurdles record of McLaughlin’s career following her 51.90 at the 2021 US Olympic Trials, 51.46 at the Olympic Games in Tokyo and 51.41 achieved at this year’s US Championships. That 51.41 has also now been ratified.

“The time is absolutely amazing and the sport is getting faster and faster,” said McLaughlin. “Just figuring out what barriers can be broken. I only get faster from here.

“The level in the 400m hurdles is certainly improving. We have a full group of girls that are willing to push our bodies to the next level and we are seeing times drop.”

Two days later, during the final session of the World Athletics Championships, Amusan and Duplantis ensured that the event ended on an incredible high.

After clocking an African record of 12.40 in the 100m hurdles heats, the world was put on notice that 25-year-old Amusan was capable of something special.

The goal was to come out and to win this gold,” she said. “Honestly, I believe in my abilities, but I was not expecting a world record at these championships.”

While Amusan might not have been banking on a world record, Duplantis’s development means that there is a certain level of expectation whenever he takes to the runway. He lived up to it again in Oregon.

Clearing 6.21m on his second attempt, the Swedish 22-year-old improved his own world record by a centimetre. It was the fifth time that Duplantis had broken the global mark, but the first time that he had achieved the feat outdoors.

Duplantis set his first world record in Torun in February 2020 when he cleared 6.17m and followed that with 6.18m in Glasgow a week later. Then this year, both times in Belgrade, he cleared 6.19m on 7 March and then 6.20m at the World Indoor Championships on 20 March.

The performance in Oregon secured him his first outdoor world title.

“It is the medal I was missing,” he said. “Usually, it (the world record) is always somewhere in the back of my mind, but today I was focused on the win.”

Meanwhile, another record was broken in Oregon when Botswana’s Tebogo stormed to a time of 9.94 (1.1m/s) to win his 100m heat.

That time has now been ratified as a world U20 record, although the 19-year-old did go even faster at the World Athletics U20 Championships Cali 22 at the start of August, running 9.91 to win gold. That time is awaiting ratification.

Over 30 Million Up For Grabs As 36 Lions Magnificent 8 Grassroots Tournament Hits...