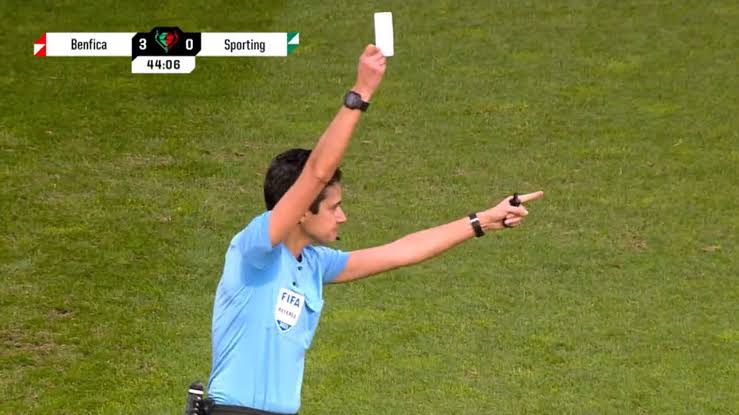 A historic moment took place in a Portuguese women’s cup match between Sporting Lisbon and Benfica when a white card was shown for the very first time.

Its introduction came midway through a women’s cup quarter-final match between fierce Portuguese rivals Benfica and Sporting Lisbon. Benfica were leading 3-0 against their cross-city opponents when the card was shown, and the fans in attendance at the Estadio da Luz reacted positively to its appearance.

Benfica were leading 3-0 in their derby game against Sporting Lisbon – however, just before half-time, play was halted as one of the substitute players in the dugout felt ill.

Medical staff from both sides rushed to assist the player. After the issue was dealt with, the referee Catarina Campos then brandished the white card to both of the medical teams prompting a warm reception from the fans.

Benfica went on to win the game 5-0 and advanced to the semi-finals, in front of 15,032 fans – a record women’s attendance in Portugal.

Football fans have grown accustomed to the yellow and red cards which have been an integral part of the game since the 1970 World Cup, but what is the meaning of the new white card – and why was it used during the game between Benfica and Sporting.

The reason that fans haven’t seen a white card before is because they have only been recently introduced to the game.

White cards have been brought to football as part of an initiative for officials to recognise and praise clubs for fair play and good sportsmanship during games. White cards are designed to improve ethical values within the sport.

The white card is a part of several other measures that have been introduced in Portugal. Other initiatives include concussion substitutes and longer stoppage times – as seen in the recent World Cup in Qatar.