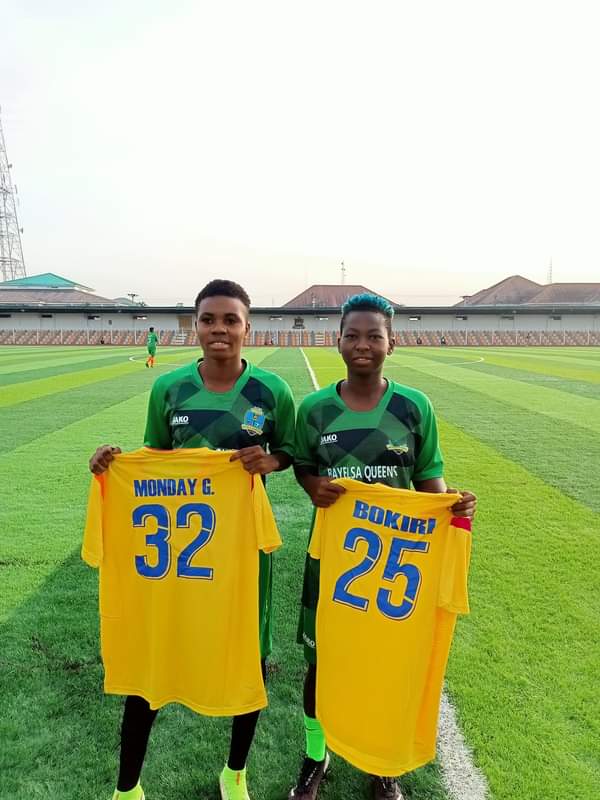 The Chairman of Bayelsa Queens FC Pastor Robin Apreala alongside the Technical Adviser Moses Aduku and other Board Members have officially unveiled the two new players secured for the team ahead of the NWFL Super Six which also serves as qualifications for 2022 WAFU CAF Women Champions League qualifiers.

The unveiling ceremony held at the main Bowl of the Samson Siasia Sports Complex witnessed the supporters club of the team drumming amid singing and dancing to welcome the new acquisitions.

An elated Joy Bokiri thanked the Board of Bayelsa Queens FC for the show of love and hospitality on her return from the loan spell in Turkey. She promised to put in her very best at the NWFL Super Six.

On her part, Gift Monday said that she is in Bayelsa Queens to win the Nigeria Women Football League Super Six for the team and thanked her new team mates for the welcome accorded her since arriving.

Technical Adviser Moses Aduku thanked the Robin Apreala led Board for making available these two quality players to beef up the team ahead the Super Six.

Chairman of Bayelsa Queens FC Pastor Robin Apreala also thanked the Commissioner for Youth and Sports Development Dr Daniel Igali for the support in seeking for the needed funds from the Bayelsa State Governor Senator Douye Diri through the Deputy Governor Senator Lawrence Ewruhjakpor in getting the players.

However, the team is expected to go into closed camping by the 2nd of May if available funds from the Bayelsa State Government is released on time before proceeding to Benin City for the NWFL Super Six.

AFCON 2021: CAF Set To Move Matches From Douala To Yaounde Due To The...

“The Match Against Senegal Will Be a Defining Moment For The Copper Queens,” –...

The Poor Conditions Of Some Nigeria Stadiums That Once Hosted FIFA, AFCON, AWCON Tournaments...