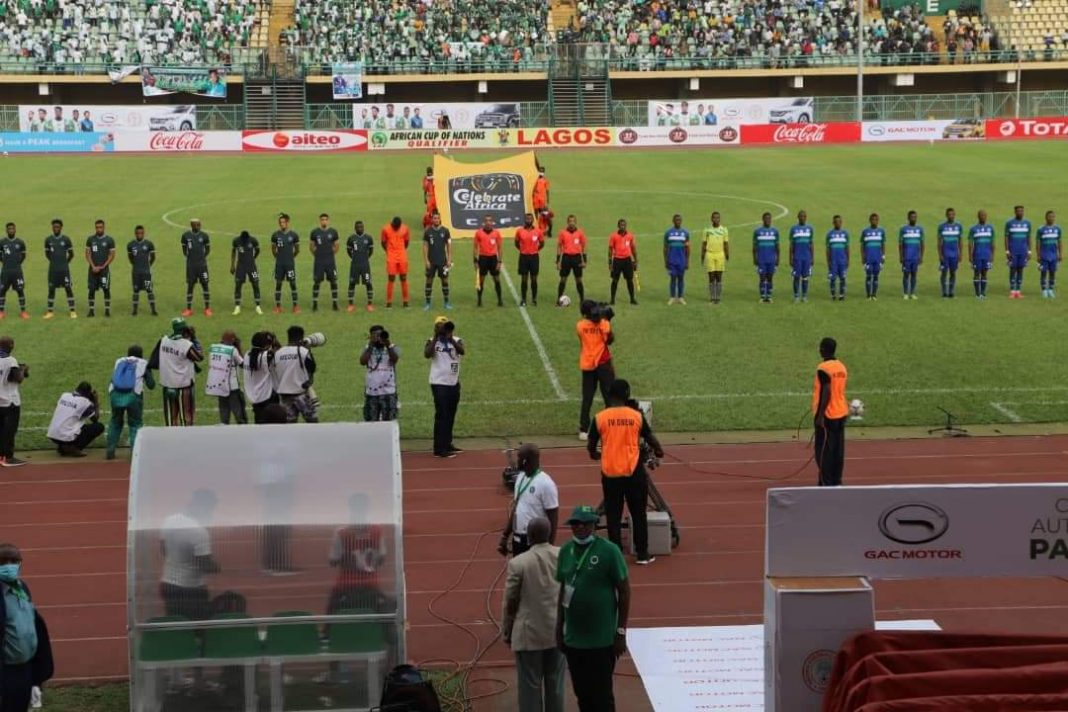 The return of Nigeria’s Super Eagles to the City of Lagos for a competitive Game after 20 years on Tuesday, 30 March, 2021 recorded an overwhelming success in the Match against the Crocodiles of Lesotho at the Teslm Balogun Stadium in Surulere.

Super Eagles won the Match by defeating the Lesotho 3-0. The Three Goals were scored by Victor Osimhen, Oghenekaro Etebo and Paul Onuachu.

The historic Match recieved massive support from the Sports loving Governor of Lagos State, Mr. Babajide Sanwo-Olu who ensured that the Lagos State Sports Commission and the Nigeria Football Federation (NFF) got the necessary support and the enabling environment to host the Africa Cup of Nations qualifying Match.

All the state Government’ machinery were mobilised for the crucial Eagles’ match, despite the restriction on the number of Fans allowed to watch the Match, Nigerian darling team did not lack support before and after the cracker, thanks to the synergy of collaboration between Sola Aiyepeku-led Lagos State Sports Commission and Amaju Pinnick-led NFF.

Governor Sanwo-Olu said before the Match: “I am excited as for the first time in 20 years, we witness the homecoming of our dear Super Eagles as they play their AFCON qualifier in our State soccer homeground, the Teslim Balogun Stadium.

” Sports is an important part of our THEMES agenda for Lagos.

“We have invested in developing our Sports infrastructure, setting forward a clear mandate and plan to ensure Lagos is the number one destination for all our Sports Teams.

“We have supported the Super Eagles in their journey to this AFCON and I congratulate them on qualifying.”

Executive Chairman of Lagos State Sports Commission, Aiyepeku said: “We must thank our Sports loving Governor, Mr. Babajide Sanwo-Olu for giving us his support for hosting this match successfully, and we want to thank the Management of the NFF for believing in us to host this International engagement of the Super Eagles. We must also thank the Almighty God for us to have a hitch-free event. I will also want to applaud the orderly conduct and the spirit of Sportsmanship exhibited by the few fans who watched the encounter.”

Director General, Commission, Mr. Oluwatoyin Gafaar said that now that the Super Eagles have made a victorious return to the ‘Centre of Excellence “, the city of Lagos is ever ready to host the senior national Team in the future.

” In the last few days, we have been able to show the Eagles and their officials our hospitality and more importantly that Lagos is conducive to host any international football match.

“The vision of the Government of Mr
Babajide Sanwo-Olu is to make Lagos the hub of Sports not only in Nigeria, but on the continent of Africa and this is what we at the Lagos State Sports Commission are working assiduously towards achieving this dream,” Gafaar said.

When Last Did You See A Label With Made in Kenya- Ralia Odinga To...

Qatar 2022: Nigeria Stadium Lights Went Off After Ghana Refuses To Leave Stadium After...

CAFWCL: Hasaacas FC Of Ghana, Mamelodi Sundowns Of South Africa To Clash In The...