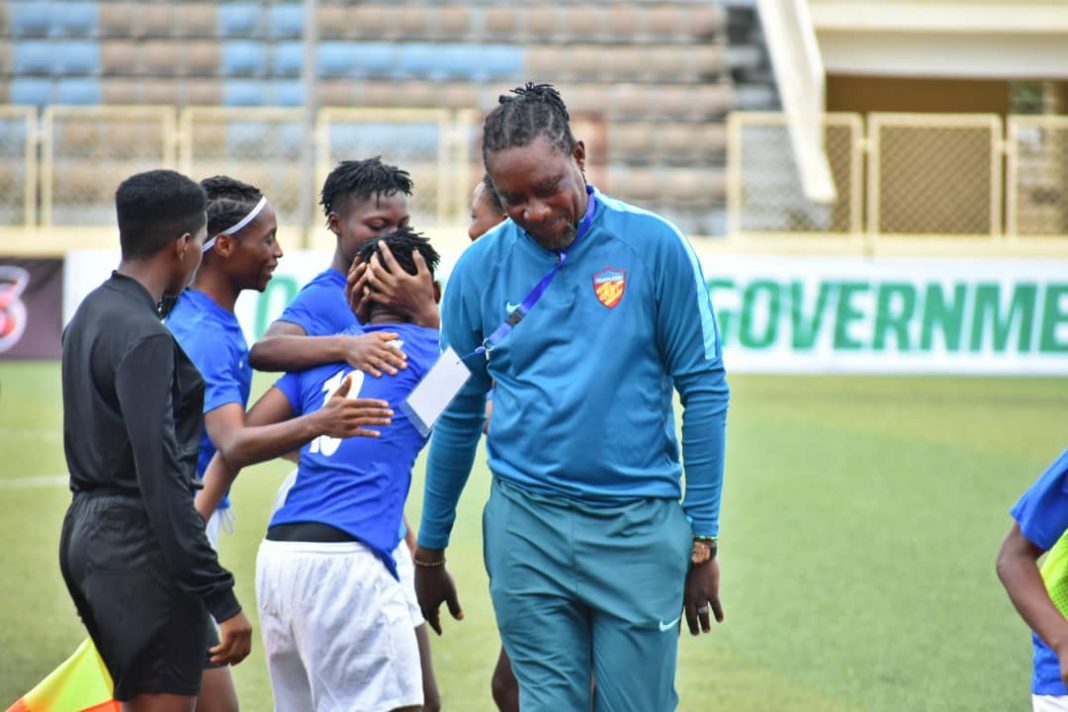 Two top teams that came into the NWFL Premiership Super Six with so much expectations and promises yesterday crashed out of contention with huge disappointments.

It was the end of a dream for Bayelsa Queens of Yenagoa and Edo Queens of Benin City when they both lost their games woefully, each conceding 4 goals apiece.

Bayelsa lost 4-0 against a resurgent Rivers Angels of Port Harcourt, which was on the verge of crashing out before the Rest Day One with just 2points going into the Day Three games. The Angels ended the game with five points out of a maximum of nine, and a second-place standing on the table, strong enough to contest for the title and the CAF Women Champions League ticket.

Bayelsa Queens loss costs the team’s Chief coach his job, as the club Chairman, Robin Apreala, announced the sacking of Moses Aduku.
Aduku, also an assistant coach of the national Under-20 Women’s national team, thus became the first casualty of the Super Six.
It was an irony going into the Super Six as the best coach and sacked Midway into the Super Six for poor performance.

The second game of the Match Day Three, witnessed the biggest upset of the Super Six, as FC Robo of Lagos whitewashed Edo Queens 4-1 to send the highly motivated Queens out of contention and eliminated from the battle for the 2021 league title and WAFU B qualifiers for the CAF Women Champions League.

Edo Queens coach, Stanley Osazee, said after the match, that; “His team has learnt a big lesson, that, the preparation for the Super Six is a different type. You must be ready to play your best game in all matches. It’s our first time in the Super Six, and we tried our best, but it was not good enough.”

The star on the side of FC Robo was team captain, Monday Gift, a Super Falcons player, who has scored three goals in the Super Six as the highest goal scorer. Monday Gift scored eight goals in the regular season.

The cracker between Delta Queens and Sunshine Queens at the Dipo Dina International Stadium Ijebu-Ode, ended 2-0. Delta Queens led 1-0 in the first half and scored a second in the second half to brighten their chances of fighting for the title and indeed the CAF Women Champions League ticket.

The Delta vs Sunshine games was watched by the retinue of NFF board members and bigwigs led by it’s president, Amaju Pinnick.

A win for Rivers Angels will further boost their chances to challenge for the title. The second game at 12 noon would see Delta Queens attempt to get all points at stake from eliminated and destabilised Bayelsa Queens.

While the third match of the day would see FC Robo slug it out with Sunshine Queens in obviously the match of the day, in a Western derby and a replay of the Week 12 game in Lagos which Robo ran away with three points in a very tough encounter at the Legacy Pitch of the National Stadium, Lagos.

AFCON 2021: Burkina Protest To CAF After Five Of Their Players Test Positive To...

2021 Afrobasket: “They Play Harder Than Us”- Mike Brown After Ivory Coast Defeat