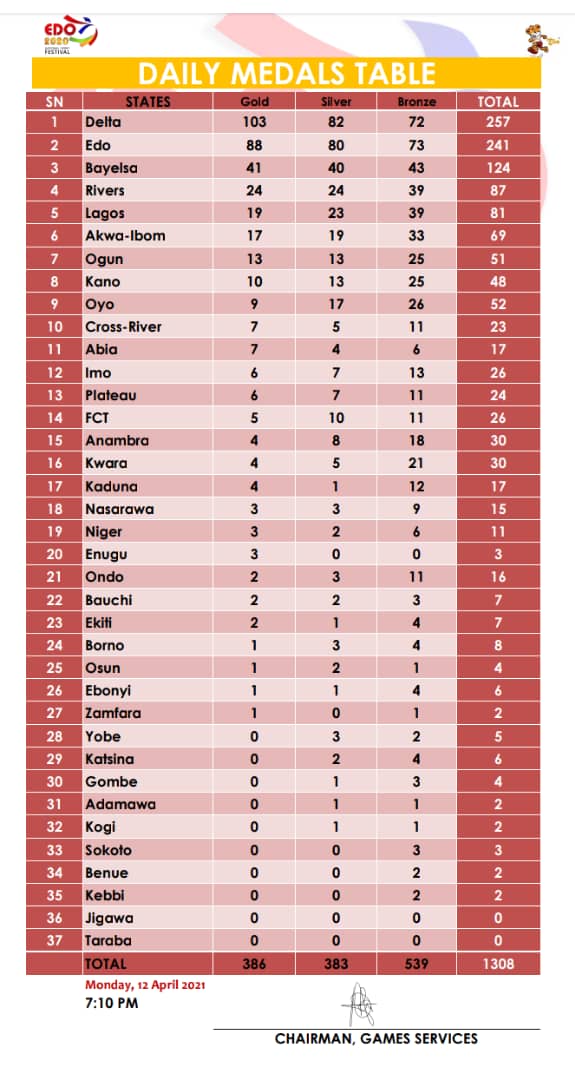 Team Delta continuing her dominance in all the sports entered for at Edo 2020 National Sports Festival has amassed 27 medals,consisting of 13 gold,11 silver and 3 bronze to top the weightlifting event of the ongoing sports fiesta.
The goal haul started with Joy Eze who claimed 3 gold medals in two different categories of snatch and clean and jerk.

Desmond Akano continued with the winning streak by garnering 3 gold with a lift of 185kg in the clean and jerk event.

Seldom Dickson and Ismaila Sodig were the other gold,silver and bronze winners.
Coach of the team,Emeka Ajie attributed the success to their serious preparation as they camped in Lagos for utmost output.

Coach Emeka who was a national and international champion in weightlifting,said he was not surprise at the superlative performance of his team because they deserved it due to the tremendous support given them by the chairman of the Delta weightlifting Association,chief Tonobok Okowa.
Okowa who is also the south south president of Nigeria weightlifting Federation is known sports motivator, who stops at nothing at encouraging not only weightlifting but the entire Team Delta to always be at their best.

The secretary of the body,James Okocha said the weight lifters are committed athletes who never shy away from training. He added that they will win more medals as the competition gradually comes to an end.

Sports Correspondent, Shedrack Saxon Udu,AKA The Sports Supremo who is in Benin covering the sports festival and also the Publicity Secretary of Delta Weightlifting Association, reports that the events continues today and not just weightlifting is leading but Team Delta are on top of the overall medals table with over 103 gold medals.

List Of Selected Referees For 2022 Women Africa Cup Of Nations