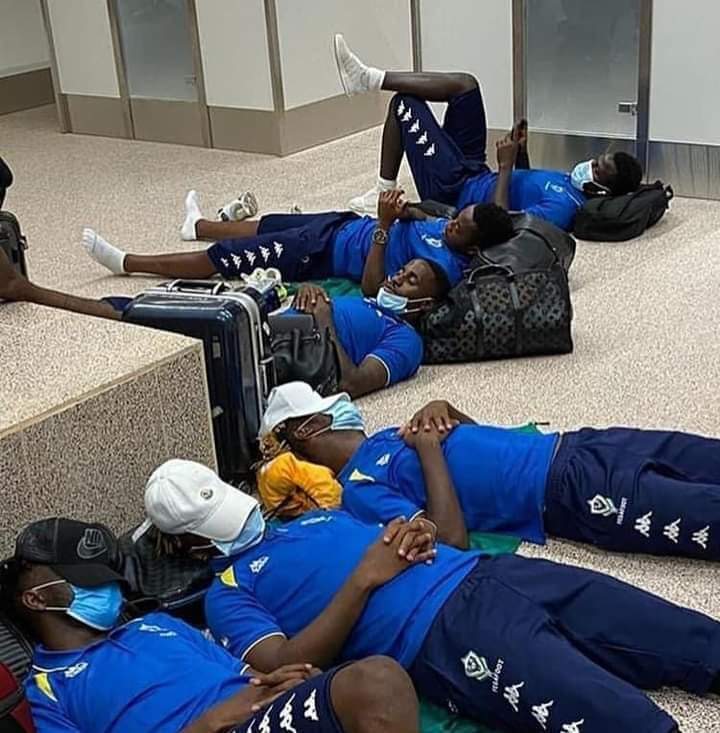 Before the match in Franceville, Gambia sent a delegation 2 days before the scheduled match and it was led by former FIFA referee Modou Sowe who the Fegafoot president says he knows very well. Along with the liaison officer, The Gambian delegation was received by Fegafoot.

When it came to the issue of covid, modou sowe insisted that the Gambians were not going to take the covid test upon arrival. Fegafoot’s president then explained to Modou Sowe the covid law requirements of Gabon. In fact, while there, there were two Gabonese footballers who just arrived and the President of the federation told Mr. Sowe to watch what’s going to happen to them. That Mr. Sowe can observe that they will undergo the mandatory covid test as this is the law of the land and there are no exceptions.

According to the Fegafoot president, knowing that they have a return match in Gambia in a few days, they assessed the risk of being treated bad in Gambia and decided that although this is the law in Gabon, they needed to ask for an exception. They engaged their health ministry and were able to secure an exception that after going through immigration and retrieving their bags, the Gambian squad can come into the country without taking the mandatory covid test. The ministry however did not give the Gambians a waiver and insist that a test is mandatory but the Gambians won’t have to take it at the airport but rather at their hotel – the raddison.

According to FEGAFOOT, the logistics for match in franceville, which is outside the capital was done within the CAF guidelines which saw them hire an airbus to transport The Gambian squad from Libreville to Franceville. Upon arrival, the Gambian delegation told them that they came in style (private jet – HELLO) and will take their private jet to franceville instead. According to FEGAFOOT, they lost the funds they paid for the airbus they hired to take the Gambians to Franceville. They then took the opportunity to use that private jet to transport the fegafoot officials who were going to attend the match anyway.

Holding email communications in a folder, Fegafoot makes a point that they communicated their travel plans to the Gambians. He said they were supposed to land in Banjul around 8:00pm but as all travellers know, delays of 2-3 hours is normal in air travel.

According to FEGAFOOT, before the Gambians came in Libreville, they sent a health protocol which consisted of the requirements of their country’s covid law.

On the Gambian side, the protocol received by the Gabonese clearly stipulates that the travellers coming into Gambia must have a negative PCR covid test 72 hours before arrival. Based on this, FEGAFOOT then took the precaution of taking pcr test of their footballers on November 14, 2020 – 24 hours before arrival in Banjul.

FEGAFOOT’s president said that they landed in Banjul and were received normally by immigration. While being processed, a Gambian man dressed in white moved from cabin to Cabin giving instructions to the immigration officers processing them.

The Gabonese ambassador based in dakar who was at the airport to receive the panthers made an arrangement with the agents at the bjl airport to have the players processed first so that they can quickly go to their hotel to rest.

What is striking to him is that without any explanation, an immigration agent decided to take all the passport of the panthers and locked them up in a cabinet. He makes the point that the agents did not even respect the diplomatic protocols that exist within countries that when an ambassador is present, common courtesy must be extended.

A MOH staff then showed up and asked to verify the covid certificates of the panthers. According to FEGAFOOT, the certificates were in the possession of their team doctor who presented the entire folder to the MOH staff.

The MOH staff then asked the question, at what time did you guys take the test. The traveling panther team Dr. then quipped and asked why does the time matter if this was taken 24 hours prior to us arriving in Banjul. According to the Dr. even if taken 48 hours prior, they meet the 72 hours requirement of Gambia’s covid test for travallers coming to the Gambia.

The MoH official then handed back the certificates to the Gabonese Dr and left. About an hour later, the same MOH staff returned with testing equipment insisting to take a test of the panthers. They refused.

Holding up a paper from the GOTG, which has the COVID requirements for travellers and which FEGAFOOT says that according to Gambian law, Covid test are not done at the Airport.

Fegafoot also make the point that Gabon’s minister of sport arrived in Banjul earlier in the day, presented his certificate and left the airport without taking the test, so to them, what the Gambians were asking of them made absolutely no sense. He also says their advance team went through the same protocol at the bjl intl airport without being subjected to what the Gambians are subjecting their squad to.

The Gabonese delegation then just sat and slept at the airport since a solution was not forthcoming. Around 5am, they involved their minister of sport who was at the hotel sleeping. Their Ambassador drove his car to go get the minister. Between 5am – 6:30am, the minister & Ambassador then continued their negotiations with their Gambian counterparts and at 6:30am, without a covid test or requirement to take one at their hotel, their passports were handed to them and they were allowed to go in.

As a formality, CAF held its meeting with the two federation and only then did FEGAFOOT’s president realize that the man who was terrorizing and threatening the Panthers at the airport was a former top military official who doubles as VP of the GFF.

In the meeting, the match commission brought the issue of the covid test and that country laws supersede CAF’s guidance on covid. FEGAFOOT then insisted that it is not Gambian law to do test on arrival and they were compliant. He then asked if the referees and CAF officials who came for the game were required to undergo a test once they presented their certificates as required by law.

During the technical meeting between the two federations, the match commissioner received a call from CAF’s secretary general and excused himself. He later return to tell the those in attendance that the game will be played as scheduled but a video conference between CAF and the two federations will be held that same day.

In the video conference attend by officials of both federations, CAF’s SG started by making the point that what happened at the airport is very regrettable and tarnishes the image of African Football.

On the conference, the Gambian delegation explained that the panthers and their delegation refused to show their test results. To this point, FEGAFOOT’s president asked CAF if that made any sense. He quipped that knowing what’s at stake and after going through all the trouble of taking their test and communicating with Gambia about the country’s covid protocol, why will they then not present the certificates they had in their possession? According to him, that will make them super foolish.

In summary, FEGAFOOT’s president believes that the tactic the Gambians used to give themselves an advantage over the panthers is a stone age tactic because now regional footballing bodies have tools to provide remedies and sanctions. He looks forward to CAF’s decision on this matter.